The Gurkha and the Lord of Tuesday 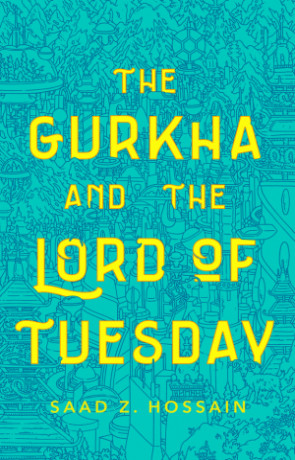 Book details About the author

Melek Ahmar, the Lord of Mars, the Red King, the Lord of Tuesday, Most August Rajah of Djinn, wakes up three millennia after being knocked out cold in a bar fight. Though his magic is weak at first from disuse, he struggles out of his stone sarcophagus, which is sealed with aging spells cast by far less powerful magicians. He finds himself among forbidden mountain peaks high above the city of Kathmandu, in a future Earth dominated by errant weather and deadly rogue nanotech. He is eager to rule and destroy once again. The Lord of Tuesday accepts the service of a lone Gurka named Gurung, who guides and, in truth, manipulates the Djinn through the unfamiliar future landscape.

While Gurung and the Djinn are the most colorful and entertaining characters in this novella, the central story thread belongs to Hamilcar Pande, a sort of sheriff in Kathmandu. Pande’s job and life is fairly dull, as the city is efficiently run and ruled over by Karma, a cold and calculating AI that constantly assesses the goodness value of all citizens of the city. These points distributed by Karma are the currency of Kathmandu. When Malek Ahmar and Gurung wander into the city and cause trouble, the Djinn’s magic field disrupts Karma’s nanotech surveillance and she must empower Pande to investigate them the old fashioned way. Pande discovers that the lone Gurkha has a violent past that involves one of the wealthiest citizens in the city and the creation of Karma herself. Meanwhile, the Lord of Tuesday is taking over parts of the city, destroying things, instigating wild parties, and attracting new followers, including ReGi, a cynical goth Djinn who is obsessed with K-pop stars and has been living in the city all along.

The Gurka and the Lord of Tuesday by Saad Z. Hossain reminds me of Neil Gaiman’s magical, somewhat tongue-in-cheek novels like Good Omens or Neverwhere. Perhaps Gurkha contains a bit more whimsy. Details of the technology and magic in the story (and how they interact) aren’t presented in much detail, but we see them as they are perceived by the viewpoint characters, including the Lord of Tuesday himself.

I enjoyed this journey through a future Kathmandu, but I have to admit that I wish there was more. The Gurkha and the King of Tuesday is short, in the novella range based on word count, but it feels like it wants to be an entire novel. Sometimes stories based on these strange juxtapositions of characters and genres might not hold up for an entire novel, but it feels like this this one would. I was left wanting to know even more about Kathmandu, and Malek Ahmar and Gurung, and especially ReGi (short for “KPopRetroGirl”).

The Gurka and the Lord of Tuesday was a quick read and well worth it. It doesn’t feel like the genre-breaking innovation it’s presented as, but it is an enjoyable story, which probably matters more.